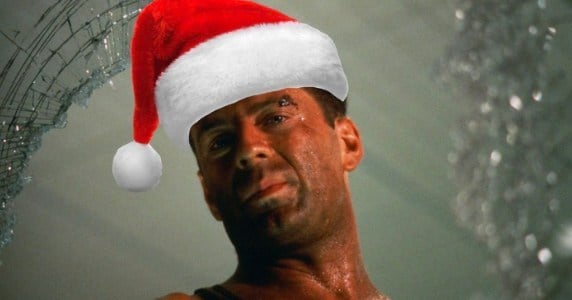 The age-old debate that has divided friends and families for years – is Die Hard a Christmas movie?

Die Hard the ultimate Christmas movie – sure it isn’t your traditional family feel-good Christmas story or a Christmas movie full of cheese, but we have 8 reasons to sell you or to shove in your friends/families face as to why Die Hard is so merry.

An NYPD officer tries to save his wife and several others taken hostage by German terrorists during a Christmas party at the Nakatomi Plaza in Los Angeles (via IMDB).

1 – It is literally set on Christmas Eve

There are too many Christmas trees scenes to count – airport, Nakatomi Plaza and even at the police station when John calls in for back up.

3 – John references that he was invited to a Christmas party

Got invited to the Christmas party by mistake

5 – Christmas music plays throughout the movie

When Powell is in the convenience store, “Let It Snow” is playing on the store’s speakers and Powell is singing the song to himself. Not to mention Let It Snow is the final song played as John and Holly drive off – So Christmas!

6. Twas the night before Christmas

When the LAPD tries to break into the Nakatomi building, Theo says ” ‘Twas the night before Christmas, and all through the house, not a creature was stirring, except… the four assholes coming in the rear in standard two-by-two cover formation”.

Even Hans was getting into the Christmas spirit and hoping for a Christmas miracle.

8 – Importance of friends and family

Like all good Christmas movies, John realises the importance of friends and family as he battles with Hans and the terrorist to save everyone in the building – especially his wife Holly.

Then not to mention the 12 Days of Die Hard

So is Die Hard a Christmas movie? Damn right it is!