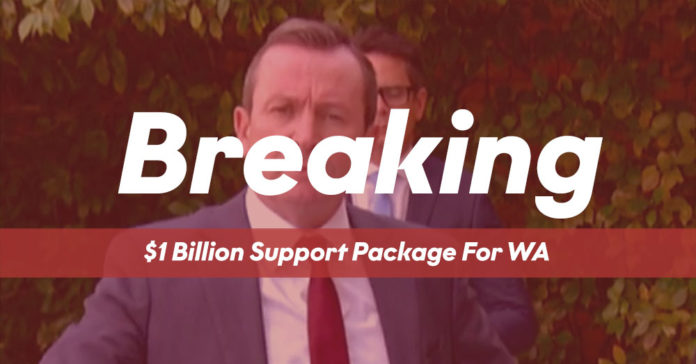 More help on its way in WA.

The McGowan Government has announced a $1 billion support package to soften the economic blow from COVID-19 and keep health care running at demand.

An energy assistance payment for new applicants will be extended to September 30, which is expected to cost the budget $25 million.

“Anyone who has lost employment due to COVID-19 becomes eligible for a concession card will receive an upfront $305 credited to their electricity bill starting in May and then a further $305 over the course of this year,” Mark McGowan said.

No interest will be charged on bills not paid because of COVID-19 related hardship from tomorrow.

Keystart applicants will also be able to defer payments and waive interest for up to six months.

Businesses will also be given relief in having electricity bills reduced and payroll taxes waived.

“When it comes to small and medium sized businesses, electricity bills for around 95,000 businesses will be reduced,” Premier Mark McGowan said.

“The $2,500 credits on small business electricity bills are there for the next year.”

Mr McGowan said his “heart went out” to businesses which had closed and West Australians who had lost their jobs.

More than 10,000 small to medium-sized businesses are expected to be eligible to have payroll tax waived.

A further $100 million worth of license fees for businesses will also be waived.

Mr McGowan said police would now conduct random checkpoints and mobile patrols on roads for people unable to give good reason for why they were travelling, with regional intrastate travel bans in place from midnight tonight.

“I know some people will be frustrated, it’s not going to be perfect. Some sensible exemptions will be allowed, such as for work, freight and of course medical reasons and compassionate grounds.”

He stressed anyone planning on travelling outside the region for non-essential purposes “to forget it”.

“We’re in a state of emergency… please take this seriously,” he said.

Mr McGowan confirmed that those who “flouted rules” risked a fine of $1000.

“If people are not following the rule, the two person rule, you can be fined,” he said.

The measures will join legislation being worked on to have electronic tracking devices put on people who breach self-isolation.

“The tracking devices wouldn’t be able to be removed,” Mr McGowan said.

“They are lockable, apparently they’re affordable and they’ll give us the capacity to track people and ensure they’re not doing the wrong thing.

Message to the rest of Australia: Stay away from WA

The McGowan Government has been working on even stricter closures on interstate travel, but Mr McGowan had a clear message for Australians on the other side of the country.

“I want to send a strong message to infected people from the east,” he said.

“We don’t want you here. I’ve told the National Cabinet. Infected people from the east are not to come to Western Australia.”

Mr McGowan conceded that there was “complexity” for Western Australians over east wanting to come home when the harder border closures came into place.

“If they want to come home after the hard border closures come up, well there will obviously be some rules around that.”

Mr McGowan confirmed the drafting of those new measures was hoped to be completed by the weekend.

Charge them for their hotel stay?

Mr McGowan shot down those quarantined in hotels at the moment complaining about conditions and food quality.

“We’re trying to make sure the virus doesn’t spread and people are being put up in hotels at this point at the taxpayer’s expense – I think they should just suck it up,” he said.

“What annoys me about some of those people is they went overseas a couple of weeks ago. I would love to be able to charge them for their hotel accommodation, I’d love to. We’re currently investigating whether we can legally do that.”

Latest Perth coronavirus news across local and federal government, plus ideas to pass the time in isolation.

Watch: The McGowan Government says it is taking measures to ensure no family has their water or power shut off

Stay up to date on with the Federal Government’s Coronavirus Australia app, available on the App Store, Google Play and the Government’s WhatsApp channel.

Where is the best meat pie in Australia? Pinjarra Bakery.