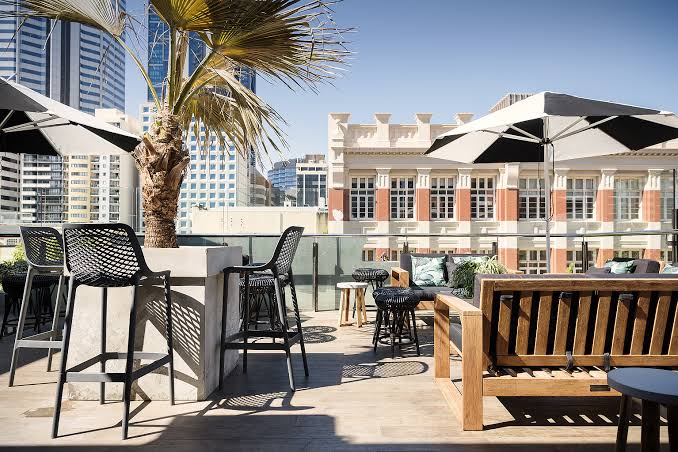 Because beers and cocktails always taste better with a side of sunshine on a rooftop bar.

The Perth rooftop bar scene has – quite literally – gone up a level or two in the past few years. It seems our love for open-air spaces has really taken hold, and rooftop bars are becoming the new norm.

If you struggle with the idea of having a cocktail indoors while the sun is shining outside, make a beeline for one of these beloved Perth bars.

The newest Perth rooftop bar has only been around for a few weeks, but Songbird is already emerging as a hot spot for an icy drink this summer.

On the 5th level of the brand new (and might we add, super swanky) Ritz-Carlton hotel, this indoor-outdoor bar has some of the best views of the city we’ve seen. From the sandstone terrace, there are unbroken views of Elizabeth Quay, the Swan River, and the city skyline.

There’s even more ‘wow factor’ if you head up around dusk, as you can catch the last glimpses of the sun setting over Kings Park. The show is best taken in with one of the Songbird cocktails in hand. Served up in a super special, handblown glass (it’s shaped like a bird), this tasty gin, WA ‘fruit tea’, and butterfly pea syrup cocktail, is only available for the hour before sundown each night.

The bloody Mary’s are better at Mechanics Institute.

This hidden gem of a bar sits atop a burger joint (Flipside Burgers, to be exact), and my gosh, do they use that to their advantage. Not only do Mechanics allow you to order burgers from below while you’re enjoying a beverage on their rooftop deck, but their famed bloody Mary’s come topped with a slider for good measure.

While Mechanics rooftop bar doesn’t necessarily have any views to boast, their chilled vibe and ridiculously well-stocked back bar make up for it in spades. If you’ve got a hankering for mezcal, they can show you a few (ask for it served with freshly squeezed apple juice – you can thank us later). If it’s a beer you’re after, they’ve got your back with those too.

A post shared by Sweetwater Rooftop Bar (@sweetwaterrooftopbar) on Oct 2, 2019 at 1:48am PDT

This one is for the folk to the south of the river.

If you’re anywhere near the portside city of Fremantle, Sweetwater Rooftop Bar should be on your hit list – not least for their Sunday yum cha experience. The $45 set menu includes 8-courses of Asian inspired deliciousness. For an extra $25 per person, you can get a paired 3-course of cocktail teapot experience too.

Even if you’re more just vibing the views, drinks, and a la carte menu, you won’t be disappointed. This huge venue has views out over the ports, and you can catch a mean sunset when mother nature is playing ball. Do yourself a favour and get yourself some pork and garlic potsticker dumplings for the show.

Look, the Rooftop at QT isn’t a one-trick pony. But, all you really need to know to be sold on this Perth rooftop bar is that they serve up negroni slushies during the summer. You’re welcome.

If you didn’t come for the slushy weekend special, chances are it was for the bangin’ view or the food. It’s a less formal affair than downstairs at Santini Bar and Grill, but the food is equally as delicious. Chow down on a Moreton bay bug roll or some tempura zucchini flowers, and wash them down with a signature ‘Aztec sun’ (jalapeno-infused tequila, lime, coriander, and cucumber) or ‘rooftop fashion’ (Bulleit rye whiskey, Amaro Montenegro, and spiced orange bitters).

Still one of the CBD’s favourite Perth rooftop bars.

Take the stairs to the top, find the big, illuminated sign at The Print Hall, and you’ve you’ve made it to Bob’s Bar – a bar named after everyone’s favourite beer fiend of a prime minister, Bob Hawke. Fitting, considering Bob’s Bar is your rooftop go-to for all things craft beer.

Just like most good craft beer serving joints, they serve up some damn fine beer food too (read: pizzas and burgers). The burger menu might be limited to just 3 choices, but the most important choice isn’t which burger you go for, it’s the number of patties/amount of chicken you want in it.

It’s disappointing when you don’t have enough of a good thing.

That’s something the team at Hadiqa quite obviously understands. They’ve taken the much-loved Perth rooftop bar concept and ramped it up another notch, to give the people more of what they really want. Yes, Hadiqa is a rooftop bar, with its own separate rooftop. How’s that for barception?

This middle-eastern themed bar is the sort of place that Instagram can’t help but love. It’s covered in the most ornate patterned tiles, and plenty of greenery – the perfect set scene for any #bff or #foodporn snaps.

Speaking of #foodporn – the fare at Hadiqa is really, really good. The best way to experience the Moroccan and middle eastern menu is with one of the feast menus ($55.00 per person), expertly matched with 3 wines from their impressive wine list (another $30.00 per person).

Connections is Perth’s favourite LGBTIQ+ club. It’s also the home of one of Perth’s favourite rooftop spaces. While the first floor of the club is reserved for the spectacular drag shows and some serious dancing, the rooftop is a much more chilled space. Well, as chilled as you can get when it’s attached to a club.

If you need a breather from all the dancing, head up an extra flight of stairs to the open air. There’s a stunning view of the city skyline from the rooftop, and a separate bar that has just that little more time to expertly mix you your favourite cocktail.

It’s not every day you find yourself heading to a laundromat to slurp down a delicious bowl of ramen, and sip on an Asian inspired cocktail. Even if it is, the novelty of heading to the super fun Lucky Chan’s bar never wears off.

Once you’ve made it past the laundromat exterior and enjoyed some time in the kitschy bar, take the stairs up a few flights to the rooftop space. She may be small, but she’s pretty mighty (and a pretty great spot to enjoy a cold beer on a balmy night too). The restaurant can get super busy, so the rooftop is a great spot to escape the hustle and bustle.

Look, the name pretty much tells you everything you need to know about this Perth rooftop bar… except for the fact it has a super cool rooftop space for you to get Tiki as FK on. It’s right next door to the Connections rooftop, so both bars have the same outlook, they’re just very different on the vibes.

As one would expect, there’s a big ‘rum and fruit cocktail’ focus at Tiki as FK. It would be a crime to omit the classic Mai Tai from the menu (so they don’t), but they keep things fresh by switching up the special cocktails every so often. If rum isn’t exactly your thing, they do also have a small but respectable (also not very Tiki as FK) selection of beer and wine.

Prince Lane has had a colourful few years.

It started its life as the rough and tumble Carnegies, got a new lease on life as the more polished Emerson bar, and is now kicking on as Prince Lane. The most important part in all of this is that that gorgeous rooftop space hasn’t gone anywhere. Yes, you can still take a prime position above Murray Street, and catch some rays with a glass of Rosé and a slice of pizza in hand.

Don’t miss a further bite or sip in Perth

Hit ‘Send Message‘ below to subscribe to our latest eats and drinks news.

Check out our Guide to Summer in Perth.