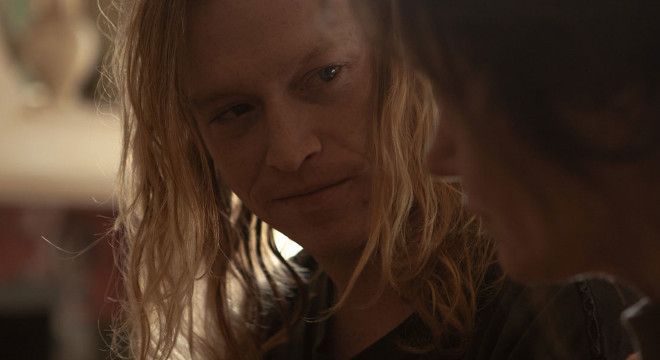 To be honest if I was left to my own devices I probably wouldn’t have gone to see Nitram, the movie about the events leading up to the 1996 Port Arthur massacre. it somehow felt disrespectful or ghoulish. But having seen the movie now I’m pleased I went.

Nitram the movie tracks through the days before Martin Bryant’s actions leave 35 people murdered and 23 injured. It goes down as one of the world’s deadlist shooting sprees.

Nitram, (Caleb Landry Jones) is the first son of Maurice (Anthony LaPaglia) and Carleen Bryant (Judy Davis). The days are long for the adult Nitram as he lives a life of isolation in his parents suburban home. His childhood included bullying and name calling and we find the teenage Nirtam trying to impress his primary school children “friends” by setting off firecrackers. Thanks to his fathers watchful eye Nitram doesn’t get into too much trouble.

At 19 he meets reclusive 54 year old heiress, Helen Mary Elizabeth Harvey (Essie Davis) who takes him in. Life appears to be moving forwards with Nitram gaining some of the acceptance he was craving. She describes him as considerate, helpful and funny. However, when that friendship meets its tragic end his anger grows as does his interest in guns.

Nitram the movie is an attempt to understand why and how the atrocity occurred. It comes to Luna  Cinemas straight from MIFF and from Cannes, where it was the first Australian film to screen as part of the illustrious festival’s official competition in 10 years and where it received a seven-minute standing ovation.

Bryant is currently serving 35 life sentences plus 1,652 years without the possibility of parole.

All of the acting was superb. When you start to praise Jones for his protrayal of Nitram you are reminded of Essie Davies and then LaPaglia and Davis. The movie is a scary reminder that money talks. The ease with with Nitram can build an arsenal of guns is frightening and we are reminded of the gun buyback scheme put in place after the massacre. One of the scariest parts came before the credits were the audience learn there are no more guns in circulation now than prior to the buyback.