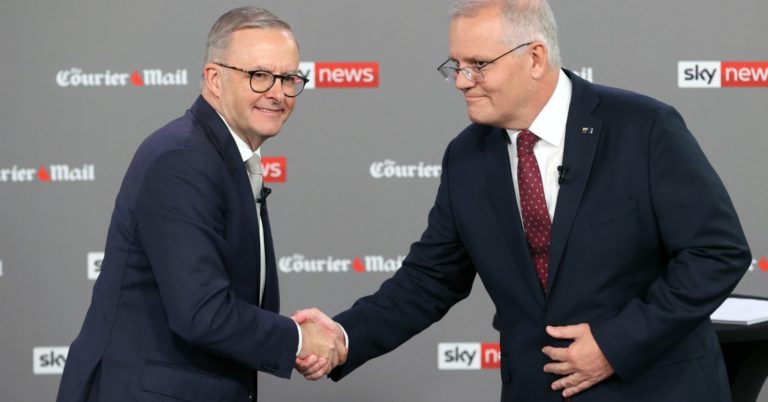 Debate number two for the Federal Election Campaign is done and dusted – but who was the biggest winner?

Debate number two of the Federal Election kicked off between Anthony Albanese of the Labor Party and Scott Morrison of the Coalition on Sunday night.

This time with a slightly different format.

No live studio audience, but instead Channel 9 hosted the leaders who answered the questions not from punters but from a panel of journalists.

And the leaders got to ask each other questions of their own.

So what happened in the second debate?

Both leaders were grilled on the cost of living, and whether they’d extend measures like cuts to the fuel excise (surprise, neither will).

Albanese grilled Morrison on minimum wage and whether people like gig workers (Uber drivers) deserve the $20.33.

Morrison dodged and dived and Albanese seized on his lack of commitment to the rate as “not getting it”.

Morrison on the other hand talked electricity prices and how they’d gone down under his government while claiming they’d go up under Labor because of their “irresponsible emissions targets”.

No surprise, the Solomon Islands was of focus yet again.

Albanese called it a foreign policy failure and Morrison said the deal between the Solomons and China was “not in the Solomon Islands’ interest”.

But then he got nasty, asking Albanese how many times Labor deputy leader Richard Marles had met with the Chinese ambassador (basically insinuating Labor is in China’s pocket).

Albanese said it was an “outrageous slur” and hit back at how badly Morrison had handled the Chinese relationship and not met with any officials.

Both leaders were asked about corruption in politics, to which Morrison said he’d never seen corruption on his side (no seriously that was his answer).

Albanese said corruption was rife in Canberra and it needed to be rooted out.

Both leaders are keen on some kind of anti-corruption body but Albanese wants one that’s retrospective and can hold public hearings.

What questions did they ask each other?

The segment where they asked each other a question was what you’d expect, mean and aimed at making the other person trip up.

Morrison asked Albanese if people would need to pay Labor back for the stake in their homes under Labor’s Help to Buy scheme, to which Albanese said only once they earned over the set threshold.

The Prime Minister seized on the fact that if people couldn’t pay Labor back (which would be he’d because Labor would only set instalments that you could afford) you’d have to sell the house.

Albanese got a zinger in, asking the PM why he said the vaccine rollout “wasn’t a race” (when it clearly was).

Morrison actually admitted he shouldn’t have said that. Boom.

Well, this is a little less clear because viewers were asked a bunch of questions like who was the preferred leader, who won the debate and who was likely to win the election.

Just like last time, it was a close call, with heaps of people still “undecided” about all those questions.

The two leaders will clash again in just a few days, debating on Channel 7 on Wednesday.