Albo’s Visit To WA, Why Did The Opposition Leader Head West? 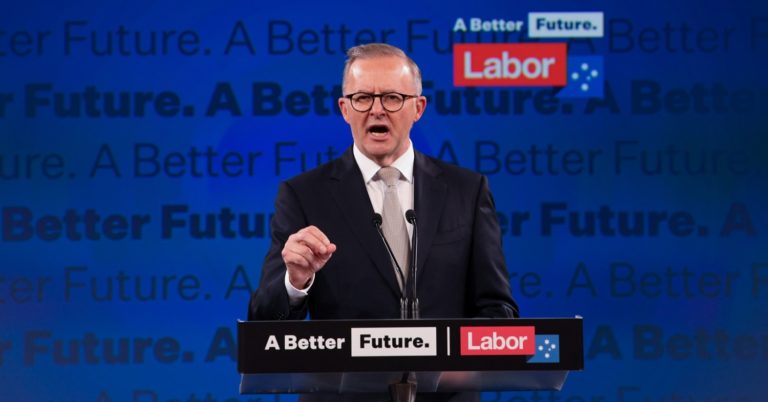 Albo’s Visit To WA, Why Did The Opposition Leader Head West?

You may have seen Anthony Albanese delivering a speech in one of the grand rooms at Optus Stadium as he continues his Federal Election 2022 campaign.

But why was he there? What was he doing?

Albanese was in WA to officially launch the Labor campaign.

“But the election has been running for weeks!” we hear you say.

And to that, we say yes, we don’t know what to tell you.

The Campaign is a rah rah event attended by the Party faithful, with the main frontbenchers and the leaders giving speeches that really lay out their pitch to be elected or re-elected.

Albanese last week confirmed his launch would be in WA, the first time a campaign launch has been conducted in the West since WW2.

Again, we don’t know what to tell you.

A sea of red filled the room at Optus Stadium, with Labor members but also former Prime Ministers like Kevin Rudd and Paul Keating in attendance.

After a welcome to country, Labor’s candidate for Swan spoke welcoming everyone to the electorate before Penny Wong stood to talk about Albo, someone she described as a “steadfast friend”.

Heartthrob Jason Clare spoke next, absolutely ripping Morrison as “all tinsel all tree” (what a line).

Then State Daddy Mark McGowan stood and spoke about all he had in common with Albo.

That included both getting COVID on the same day, both owning poodles and both staying on diets but never really getting close to the absolutely striking looks of South Australian Peter Malinausks.

McGowan turned to serious matters of sharing the same “ethos” as Albo, before introducing the man himself to the stage.

Before Albo got on stage though, an ad played out pushing home the need to vote for Labor.

And as the voice narrated Labor’s pitch, eyebrows were raised and whispers swept the room.

And to that we can confirm dear reader, yes, yes it was.

Albanese delivered what would have been an extremely rehearsed speech on an almost Ted talk-esque stage, complete with circular blue carpet and big white letters proclaiming “a better future” behind him.

There were some things we knew already. Like the fact Labor would institute an Indigenous Voice to Parliament (though we don’t know when) and really focus on improving aged care.

But there were new things as well.

Addressing the Coalition’s announcement that it would cut medicines on the Pharmaceutical Benefits Scheme by $10, Albo did one better and announced medicines would be cut by $12.50.

He also committed to closing the gender pay gap, making it an objective of the Fair Work Commission.

Albo said his Party would build more electric vehicle charging stations to get more EVs on the road, and also announced a massive $1 billion fund that would go to the resource sector to help it process raw materials and create things like batteries, rather than just digging resources out of the ground and shipping them overseas.

Albo flew out of Perth just hours after the launch on Sunday, and so all up only stayed a couple of nights in the West.

He’s headed back East now for Labour Day events in Queensland, the only other State except for WA where Liberals hold the majority of seats.

As of Monday, there are just three weeks left of the campaign, and we’re still yet to hear when Morrison will hold his own launch.

The main question is who will have convinced Australians to vote them into government by that time.