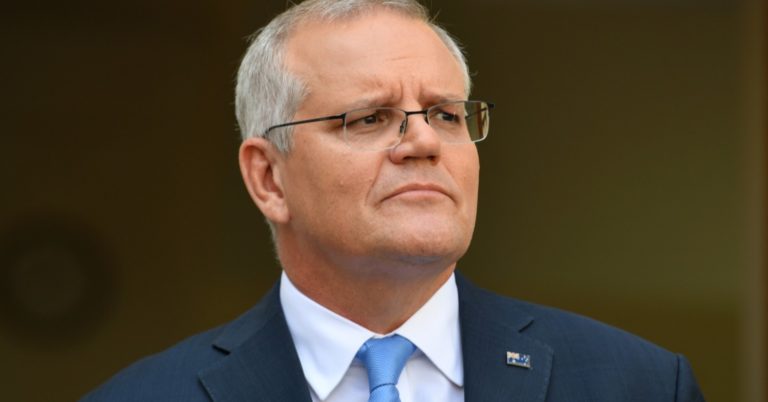 They’ve been in power since 2013, with three full terms in government, so what are they bringing to the table in 2022?

It’s one of the centrepieces of the Liberal policy.

They want to get unemployment down below 4 per cent, but let’s be honest, so do the other guys.

The Liberals have just been louder about doing it, and about their record in getting unemployment to 4 per cent this year (fair enough, really).

Basically, employers who bring on an apprentice between October 2020 and June 2022 are eligible for a 50 per cent wage subsidy of that apprentice.

And an additional 800,000 training places for school leavers and job seekers will be supported by the government.

You heard it here first: it’s all about jobs jobs jobs.

They point to Labor needing to increase taxes to fund their (often more ambitious) initiatives.

There’s not a whole lot of NEW policies when it comes to tax, just a reiteration that they’re the Party committed to that.

They’ll also talk a lot about the Stage 1 and Stage 2 tax cuts which they legislated and there’s the Low and Middle Income Tax Offset that was in the 2021-22 Budget extended for an additional year.

Speaking of jobs, you know what creates a hell of a lot of them? Big infrastructure projects. You need all those engineers, technicians, bricklayers… the list goes on.

The government last month pumped an enormous $17.9 billion in extra funding to infrastructure projects across the country as part of a $120 billion ten year spend.

So if the opposition gets in, we may see a redistribution of some of that funding.

The Coalition is all about business, and the more Australian run and operated there are the better.

You probably remember these being talked about in the Budget, either as cost of living measures or… a cash splash for your vote.

Whichever way you see it, the fact is fuel is cheaper but only for the next six months, with the excise cut to save Aussies 22 cents a litre.

Getting us all healthy

Given the amount the government spent through COVID-19 to keep us all… well… alive, they’re really capitalising on their record for health investments now and into the future.

And yes, you’re going to be hearing them talk about it a lot this election with something along the lines of “remember who got you through the once in a century pandemic!”

From the $45 billion committed to the COVID vaccine rollout, and now $2.1 billion for this year’s “winter response plan” to prevent that double whammy of people getting coronavirus and the flu.

Their mental health spend has also doubled since they first came into power in 2013, and funding for scans in MRI machines and the like has also been of focus.

Getting tougher on crims

The government has been vocal about being tough on crime, real tough, especially when it comes to people from overseas.

They have on numerous occasions, in 2019 and 2021, tried to pass a character test bill.

Basically, the government wants to “strengthen” the character test and boot out non-citizens for crimes punishable by imprisonment of two years, even if that person didn’t go to jail or received a suspended sentence.

Labor’s concern about it, particularly around how it will affect New Zealanders and the wrath of Jacinda Ardern (remember her Love Actually moment where she called out Scott Morrison for deporting Australia’s problems?) and so have opposed it for years.

This is one the government is facing criticism for because a lot of the mismanagement of aged care (think of the debacle that was COVID-19) happened under the government’s watch.

The Coalition will defend its record and point to the $2.6 billion pot of direct assistance put towards supporting senior Australians in aged care during the pandemic.

Remember aged care is something Labor (see Labor Federal Election Policies 2022) wants to improve to, with a focus on registered nurses rostered 24/7 in all homes by next year (a year earlier than the Coalition is aiming for) and a wage increase for aged care workers.

Income support for seniors is also now up under the Coalition from about $50 billion in 2019-20 to $56.8 billion in 2022-23 (keep in mind this is something unlikely to change under Labor, it’s just the amount of money going up as the years roll on).

In response to concerns about how unaffordable childcare has become, the government announced a $1.7 billion package last year to change it… for some people.

To spend the money in the most efficient way, the government’s changes to childcare affect only low-income earners with two children or more, which translates to about 250,000 families.

Labor responded in kind to this policy with its own announcement – a massive $5.4 billion package to give more families affordable childcare.

But the Liberals have argued it will benefit those who don’t need it i.e. the rich.

You may have heard a bit of criticism about the Liberal Party’s ‘women problem’, so it’s little wonder why they have a suite of policies to show everything they ARE doing to make life better for women across Australia.

This includes things like $1.3 billion in the last budget to drive change for women’s safety and improve health outcomes for women and girls in Australia.

They also have a 20 week fully-government-funded shared parental leave scheme, that working parents can share in.

If there are some things that we haven’t talked about here that you’re wondering about, like perhaps refugee policies and national security, it’s because the two parties are very much holding the same line on these issues and neither has announced any new policies for those areas.

So yes, boat turnarounds and offshore detention will still happen under both parties.

And neither will change the defence spend or the AUKUS deal for nuclear submarines.

Learn more about the Liberal Federal Election 2022 policies via liberal.org.au.