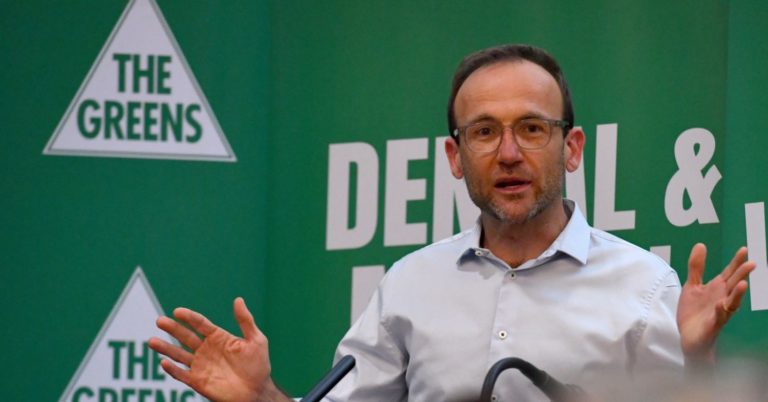 So we (kind of) know what the two major parties want at this election, right?

Besides the policies like cutting fuel excises, or creating health clinics, both want their leaders to become the next Prime Minister.

But when it comes to the Greens, it’s a very different story. And while they won’t be the main Party in power, they are set to wield a fair bit of influence.

First off, the Greens leader will never be the PM. And yes, you’ve all probably heard the criticism that the Greens can say all these ambitious things because “they will never be in power”.

But that’s not quite true. The Greens know that there might be a hung parliament – which is if neither Party gets a majority – and in that event, they will be the third-biggest party.

But, Labor leans to the Left and there have been deals done before, like under Julia Gillard’s minority government.

So it’s a possibility.

Anthony Albanese is worried about alienating Labor voters and pushing away those swing voters who are scared of the Greens multi-billion-dollar reform packages.

The Labor leader has ruled out a power-sharing agreement and said his Party would “govern in its own right”.

That’s all well and good, but what if despite his hopes he simply doesn’t achieve a majority government at the election? He will need to do a deal to secure support, probably with the Greens.

There may be an option to sign up some independents instead, but we don’t know how many will make it into parliament and how many will give their support to Labor if a hung parliament happens.

So Mr Albanese could be forced into a deal with the Greens, whether he likes it or not.

What will the Greens’ demands be if they form the Coalition

No more coal and gas.

Mr Bandt made it clear his “key demand” for the Greens to support a major party in a hung parliament would be no more new coal or gas projects, which is pretty huge.

There are over 100 projects in the pipeline, with contracts signed and preliminary work underway. The Greens want these to be ripped up in order to achieve more ambitious emissions reduction because in their view it’s really just “pouring petrol on the fire”.

University was free at one point in time, though a lot of us weren’t alive.

Now the Greens want to ease the burden of student debt and just wipe it away, to ease the cost of living pressures on young people.

These two things aren’t currently covered on Medicare, and a big reason is that they are so damn expensive.

But that’s the reason the Greens say it should go on Medicare at a cost to the government of billions of dollars.

The fact that most young people can’t afford a home is also a big concern for the Greens and their solution is to build one million homes that cost $300,000 each or are rented at no more than 25 per cent of a person’s income.

This means the homes would be heavily subsided (i.e. paid for in part) by the government.

The way to pay for it is to tax the billionaires

The Greens aren’t concerned about the fact their reform package will cost tens of billions of dollars, because they plan to increase the tax on those earning $100 million or more to six per cent of their wealth.

They also want to tax multinational companies operating in Australia and tax them hard.

Can they do it?

When deals are done it’s all about negotiating. An example is when the Greens wanted dental to be covered under Medicare last time.

Instead of agreeing to universal dental, Labor and The Greens compromised and put $5 billion into reforming the sector and giving kids from low-income households access to dental care on Medicare.

The same sorts of compromises will need to be made again if the Greens are in a position to power share with Labor.

But there are heaps of variables, like whether Labor simply wins majority government, or whether heaps of independents get in and a lot of them are happy to give Labor their support.

It will also depend on how many seats the Greens win, and that’s where you come in.

If you like the idea of power-sharing, you may want to vote for the Greens.

However, there’s a chance that this means the Coalition gets in. If you put the Greens instead of Labor as your first preference, Labor may just not get the seats needed to kick the other major party out of power.

Learn more about The Greens policies via greens.org.au.