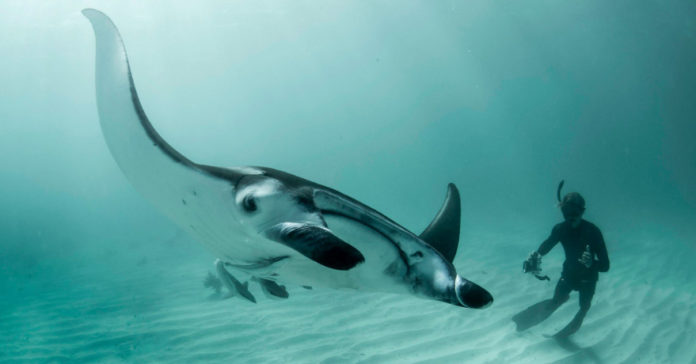 Channel your inner mermaid to swim alongside these ocean greats.

Africa has its Big Five, and our very own big blue Ningaloo Reef has got Australia’s big three – whale sharks, manta rays and humpback whales – all of which can be encountered with a once-in-a-lifetime meet and greet under the sea.

Maybe your flippers won’t be measurable to their fast fins, but you can still swim alongside these gentle giants with these matchless wildlife experiences in the Ningaloo Reef.

Swim alongside the vacuum cleaners of the sea and aquatic aerobatic show-off’s manta rays all year round in Coral Bay.

Related to the shark family, these gentle giants are anything but scary and do not have a barb, making them safe to swim alongside either on a snorkel or dive. They are graceful beings, with observing their fins gliding through the water and smooth somersaulting gymnastics being an almost hypnotic experience. Occasionally, you may be able to catch them leaping out of the water, and landing with a mighty slap! Either way, swimming alongside the manta rays is nothing short of a remarkable experience.

Manta rays are the largest of the ray family, with their wingspan almost stretching several metres in width and up to 1500 kg in mass. The sea beasts’ mouth may be intimidating at first but rest assured, their brachial filters are just hungry sifting out food, particularly plankton and krill, from ocean water. Fortunately, manta rays like to swim in shallow waters, preferring to hover the sea around 10 metres deep making them easier to spot.

See what it is like to swim with a manta ray: Moonlit Mantas – Swimming With Manta Rays At Night In Hawaii

A swim in the presence of these gentle giants is nothing short of a mesmerising affair.

The Ningaloo Reef is one of the few places in the world that attracts a whale shark migration, with this rare wildlife encounter one to tick off the seamlessly never-ending bucket list.

Whale sharks found in Ningaloo can reach up to 6 to 11 metres in length with their daunting open mouths reaching a metre wide but don’t worry, these sharks don’t bite! Despite ‘shark’ being in their name, whale sharks are harmless creatures.

Between mid-March and mid-July is your mermaid moment, with life so much better where it is wetter synchronising your flipper movement with the friendly giant’s unhurriedly pace. Snorkel tours are conducted in small numbers to ensure an intimate experience responsibly and sustainably. Once the whale sharks are spotted from the boat, swimmers are advised to jump out and swim in the presence of these ocean beasts. It proves to be such a harmonious moment, appreciating the underwater giants that roam below the earth.

The odds are in your favour too as the Ningaloo Reef currently holds the highest interaction rate, reaching a whopping 97% success rate in 2018. If you are not keen to make the big dive, you can also observe the whale sharks by boat.

Please note: These tours are high in demand with limited availability so book ahead!

There are many tour operators from Coral Bay and Exmouth that offer a chance to swim with the whale sharks.

Sweet mother of the sea, Ningaloo is one of the few places in the world where you can swim beside a massive humpback whale in Ningaloo Marine Park – that’s huge appeal!

It is estimated that over 40,000 humpback whales migrate along the coast, with tours from Coral Bay and Exmouth high in demand for a chance to have a larger-than-life face off with an ocean great.

A swim with this colossal creature will no doubt make you feel dwarf in comparison as they can reach up to 18 metres in length and weigh up to 40 tonnes, equivalent of 28 cars! Tours are conducted responsibly, with up to 7 swimmers at a time snorkelling a safe distance away for an adrenaline-charged oceanic adventure.

To have your chance to have a whale tale of time with the humpback whales, head to Coral Bay from July 1 and to Exmouth from August 1 to have your epic swim. The season runs (or swims) until October 1 for both locations however dates may vary due to migration period.

If you are not keen on getting that close up and personal with a humpback whale, whale watching from the comfort of a boat is also available.

Please note: These tours are high in demand with limited availability so book ahead! Average interaction success rates are expected to reach up to 85% with some tourist operators already achieving this rate.

There are many tour operators from Coral Bay and Exmouth that offer a chance to swim with the humpback whales.

Flight Centre has got some great deals ex Perth to Exmouth return with Qantas from $545, selected travel between 1 April – 30 Sept ’20 with a range of accommodation and tour options. T and C’s apply.

Qantas has kicked off its sale to Exmouth – click here to find out more.

This is a sponsored post for Australia’s Coral Coast  – endorsed by So Perth. We value your feedback so please contact us with any thoughts in regards to our sponsored post.