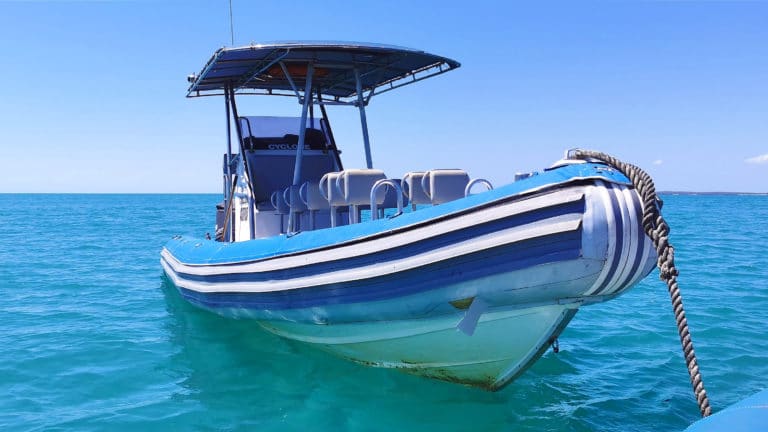 It’s one of the Kimberley’s best-kept secrets…

The blistering Kimberley sun was belting off the blue vinyl of our boat, making what was a 37-degree day even more stifling. With beads of sweat forming on my brow, I couldn’t help but hope we would be hitting the water soon – being parked up on the hot red earth wasn’t exactly helping the sweltering heat. As our amphibious boat trundled towards the turquoise waters of Cygnet Bay, and the tyres slowly receded back into the boat, the temperature dipped and my excitement for the morning ahead soared. After a warm 45-minute flight to Cygnet Bay Pearl Farm (some 215km north of Broome), getting out onto the open waters that surround the commune was just the heat relief I needed.

Our Sea Safari tour started out rather tame given the name, with a brief stop at the pearling lines that are the lifeblood of Cygnet Bay Pearl Farm. Our pearl farm tour was scheduled for later in the day, so our driver and guide, Bala, packed a rundown of the area’s thriving industry into a pearl-shell for us, before taking off at full speed towards the thousands of sandstone islands that make up the pristine Buccaneer Archipelago.

It wasn’t long before we made our second stop, coming up short of our intended destination at the islands in the archipelago. The abrupt stop was for good reason. Bala had spotted a pod of dolphins. There weren’t just any pod of dolphins – they were the endemic snubfin dolphins, one of two endemic species in the area. The waters around Cygnet Bay are known to be rich with marine life, home to dolphins, turtles, sharks, many different species of fish, and even crocodiles. In fact, just that morning there had been a crocodile spotted at our launch site back at the pearl farm.

While we may have missed the boat on seeing the resident crocodile, there were plenty of other wildlife encounters on the sea safari adventure to make up for it. Take coming face to face with a giant Boomie, for example.

Seemingly unphased by the presence of humans and my very apparent fear, the giant bird swooped down to land on the front of the boat, just centimetres from where I was sitting. And that was just the start of the exhilarating animal encounters we had while onboard. In the few hours we were out on the water, we spied turtles, fish launching themselves from the calm waters in spectacular fashion, and a school of sharks circling about in the shallows.

But none of that came close to the exhilaration of jetting through the world’s fastest ocean currents in Escape Passage, just north of Cygnet Bay. Being driven at full speed into a torrent of water moving at 20 knots is one way to get the adrenaline pumping.

As we first lined up to hit the tides, my heart started racing and the grip I had on my seat tightened. I couldn’t actually believe we were going to be driven straight into the giant whirlpools and gushing water – surely this was an occupational health and safety hazard?

It turns out we couldn’t have been in better hands with Bala. Having grown up on the islands in the archipelago, Bala knows the waters better than anyone. After telling us that he “used to swim out to the rocks and make a monkey chain [with his cousins] and tread water, then see how far [they] could get across the channel’ – the same channel we were bumping about on ferocious waters in – I knew we couldn’t be safer.

We spent hours zooming through the fast-moving channel, bouncing about, catching waves, getting air, and – resultingly – getting a soaking. It was an exhilarating experience well worth the effort of getting to Cygnet Bay. No matter how long we spent out on the water, there was no coming to terms with the massive tides that give the waters up there so much life. There’s nowhere else in the world like it.

Huawei’s P30 Pro phone undoubtedly has the best phone camera on the market. Featuring quad Leica lenses, this phone can capture anything, anywhere. It’s the perfect pocket companion, made for your travels.

For your chance to win your very own Huawei P30 Pro phone in ‘Aurora’, click here or simply tap Send Message to get started. Competition ends 29th of February.

Monique travelled to Broome as a guest of Huawei, and all thoughts and opinions are her own.

Top things to do in Broome

First published on So Where Next